An opportunity for Australia and India to bat for the same team arose last week at the University of Melbourne when a Memorandum of Understanding (MoU) was signed during a visit from Mr Ram Nath Kovind, President of the Republic of India.

Both Australia and India are at the forefront of improving the lives and well-being of people with disability. In 2013, Australia began rolling out the National Disability Insurance Scheme (NDIS), the largest social policy reform since the introduction of Medicare in the 1970s. In a similar effort to improve the lives of people with disabilities, India passed a progressive bill titled the Rights of Persons with Disabilities Act (RPDA) in 2016 and in 2015 launched a campaign called ‘Accessible India’.

President Kovind was at the University to deliver a lecture titled ‘Australia and India as knowledge partners’. 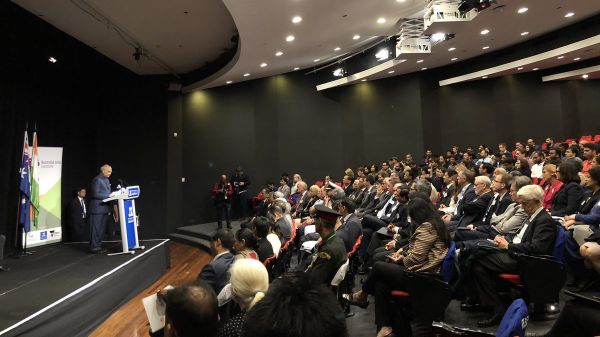 During his visit, the President signed an MoU which has kick-started a collaborative project to develop a co-designed course aimed at equipping community level workers to respond effectively to disability in under-serviced communities in India. The project is responding to a shortage of allied health professionals in India and has proposed an innovative solution: the recruitment, effective training and deployment of many more Community-Disability Inclusion (CDI) workers. The course will be designed to train local people and equip them to respond to the rehabilitation and inclusion needs of people with disability living in the community.

The project will bring together academics and practitioners from various disciplines, including public health, education, health and development and government. Lead researcher Associate Professor Nathan Grills from the Nossal Institute for Global Health has been instrumental in getting this project off the mark and intends to develop the project further in 2019 by applying for an ARC Linkage grant.

The Melbourne Disability Institute has agreed to co-fund this project and provide expertise on developing the course material to train community coordinators based in India. An expert workshop will be delivered in Melbourne, enabling Australian experts to link with and train partners from the Government of India and NGO community and to establish the interdisciplinary research team.

The Department of Empowerment of People with Disability and the Rehabilitation Council of India have put their support behind this project. In collaboration with Professor Bruce Bonyhady from the Melbourne Disability Institute and the Nossal Institute for Global Health the project will undertake modelling around investment in disability in India. Once an evidence-based, effective and accessible course has been developed, they intend to help scale the project and roll it out across India.

With so much support for this project and an outcome which has the potential to be translated in many different countries, it’s sure to be an innings where everyone wins.